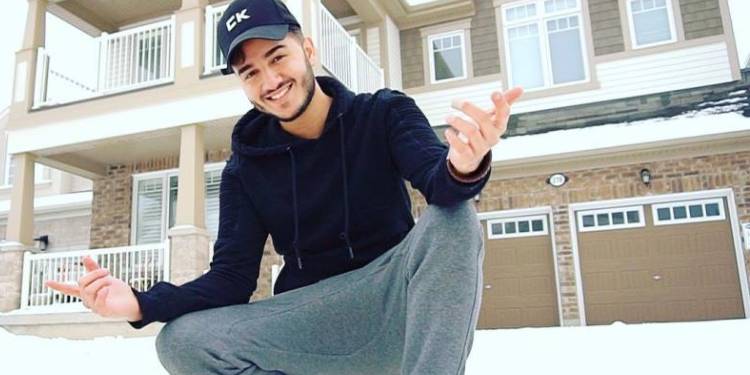 Shahveer Jafry was born on 26 November 1993 in Islamabad, Pakistan. Jafry has very sarcastic parents. He believes that his sense of humor is inheriting from his father. Both of his parents support his career and they are also seen on some of his videos. The personal detail about his parents is yet to be specified. He has four brothers. Shahveer Jafry’s brother Sunny is also a YouTuber. He lives in Milton, Ontario, Canada. Sherry Jafry, Ayaan Jafry, and Tinky Jafry are his other brother among them Tinky is the youngest of the family. He doesn’t have any sisters. He moved to Canada for his business studies and eventually, got settled there.

Shahveer Jafry is a 27 years old handsome social media influencer with an average height of 5 feet and 7 inches. He has black short hair and a beard. He has brown eyes and a long pointed nose with sharp eyebrows. Shahveer has a good smile.

How did Shahveer Jafry start his career?

Shahveer is a humorous person who started making quality content videos on Facebook in 2013. He didn’t use to post video frequently due to which he didn’t get popularity or fans at first. However, he begins to post videos regularly, and then his popularity got soared.

He often shows comical comparisons between brown people and white people. This content gives him international views. People love him for his Punjabi accent on his content. He also makes videos with his parents, brothers, friends, and girlfriend. Shahveer has also directed drama serials for Sham Idrees’s channel. The name of the drama he directed is, ‘Jaana’ and ‘marriage Ke Side Effects.

Shahveer idolizes a former cricketer and prime minister of Pakistan “Imran Khan”. He finds his leadership quality inspiring. Shahveer doesn’t like to give an exam as he uploaded a video titled “I Hate Exams!”. His zodiac sign is Sagittarius and like his sign, he is a lover of freedom, a hilarious and intellectual person. He was highly motivated by ‘FUZZY Tube’ and ‘Superwomen’ from YouTube.

Shahveer’s video often gets millions of views on his videos. Some of his most popular videos are ‘There are 2 types of a sibling.’ This video got viral and it has earned over eight million views, which is one of the highest on the channel. Other videos such as ‘kameenay Dost,’ ‘Things Only Pakistani/Indian DADS say,’ also got viral with more than eight million views.

During Ramadan, he posts a vlog about Ramadan and Eid. Shahveer’s Eid vlogs and videos get immense popularity among South Asian countries. “Stuff that happens on EID!,” “SHAYTAAN in RAMADAN,” and “Normal people in RAMADAN vs ME in RAMADAN,” are some of the viral videos of Shahveer that have over a million views on YouTube. He also posts content about a fictional comic character, ‘Pinky Chacha,’ which he created. Some of the videos where he leads the fictional character are ‘Pinky chacha RETURNS!,’ ‘PINKY chacha the DON!.’ This video got even more love than the usual video he posts.

One of his favorite pieces of content is ‘A tribute to team Pakistan.’ His Pakistani fans and cricket fans went crazy over this video. It carries patriotic emotion and feelings toward the Pakistani team. It took him more than four days to shoot that video. At the current moment, he has over 2.4 million subscribers on his YouTube channel and over a million followers on his Facebook page and has over 400 million views so far.

Shahveer Jafry is engaged with a fashion designer named  Ayesha Beig. They did the ceremony at P.A.F Base Nur Khan, located in Chaklala, Rawalpindi, Pakistan. They seem to be happy together.