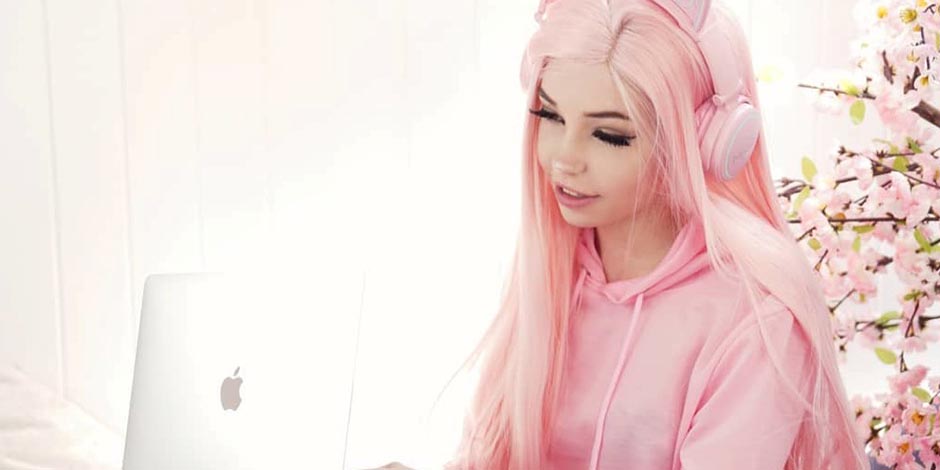 Belle Delphine, the beta trolling, gamer girl bathwater selling, quirky queen of the simps, is an internet personality best known for her antics on the internet, which consists of “kawaii” aesthetics paired with grim and sometimes gross lewd videos and pictures. She is one of the most polarizing personalities on the internet.

She has single-handedly created a whole slew of “e-girls” that copy and emulate her style. This pink-haired freak has converted an entire generation of “gamers” into her simps.

She can be considered the pioneer of the e-girl aesthetics that the TikTokers have now adopted. Many of them have come and went, but Belle Delphine has managed to stay relevant through the ups and downs in her controversial career.

After a long hiatus, Belle Delphine returned to what she did best, monetizing her antics and making lewd sets. Belle Delphine joined the site OnlyFans on June 17, 2020. Once again, she took the world by storm when she made a promotional video for her OnlyFans and posted it on YouTube with the title “I’m Back.”

She came back more vital than ever before and made waves bigger than she ever had. Her contents are now significantly more cursed and better produced than they were before. Who would have thought the antichrist would be some bubbly pink elf e-girl.

Belle Delphine’s real name is Mary-Belle Kirschner. She also goes by the name of Bunny Delphine. This pink ball of madness was born on October 23, 1999, in South Africa. She later moved to the U.K.

She studied at Priestlands School in Lymington. She dropped out of school at fourteen and worked as a waitress, barista, and a nanny. At the same time, Belle started posting cosplay pictures of herself on her Facebook account, but these pictures were later deleted. 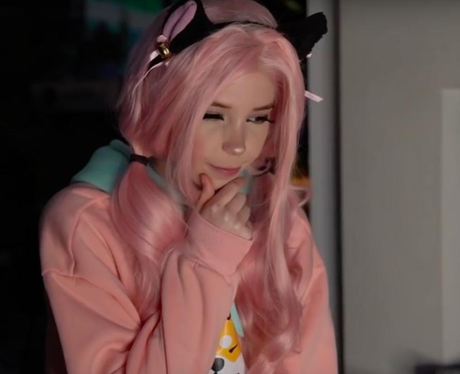 Belle has had many phases in her career, and she has had her fair share of controversy. Nevertheless, her influence can still be seen online, and she is a viral sensation with the genius mind of an entrepreneur.

By August 2016, she was posting makeup tutorials on her channel. It featured a video where she taught how to do the “cat-eye” style eyeliner.

Although she had an Instagram account since 2015, she never actually posted it there. It was in 2018 that Belle started frequently uploading on Instagram. She had a distinct style, and she posted herself modeling. She described her aesthetic as a “weird, elf kitty girl.” Her pictures prominently featured pink hair, elf ears, and thigh-high stockings, and most of them were lewd. She loved to cosplay too.

By March of 2018, she had started a Patreon account through which she acquired as much as 4,400 monthly Patreons. The highest tier she set was US$ 2,500, and there were plenty who subscribed to this tier.

This aesthetic propelled her Instagram following from 850k followers to an impressive 4.2 million in a few months. She started doing the “ahegao,” which prominently featured in her content on Instagram.

She is one of the most self-aware internet personalities out there. She knows her position on the internet, and she knows what strings to pull when to gain the most attention possible. She is one of the giant trolls online. Her Instagram featured contents that ranged from aesthetic elf leads to her fiddling with a dead octopus. These thirst traps were doing well, and her popularity was on the rise. Her character was the most mysterious online.

Famous YouTubers like WillNE and Pyrocynical added to this and paid her US$2,500 and US$3000 respectively on her Patreon for content on YouTube. This exposure added more to her popularity.

The Controversies and Death Rumors

In January 2019, Indigo White, an adult content creator, accused Belle of using images of other sex workers to portray herself when she was underage.

A video Belle posted in February of 2019 sparked massive outrage. This controversial video featured Belle holding a gun and dancing to a song with suicidal lyrics.

After this post, rumors of her death began to spread far and wide. Her posts were flooded with R.I.P. messages and “F” spams. 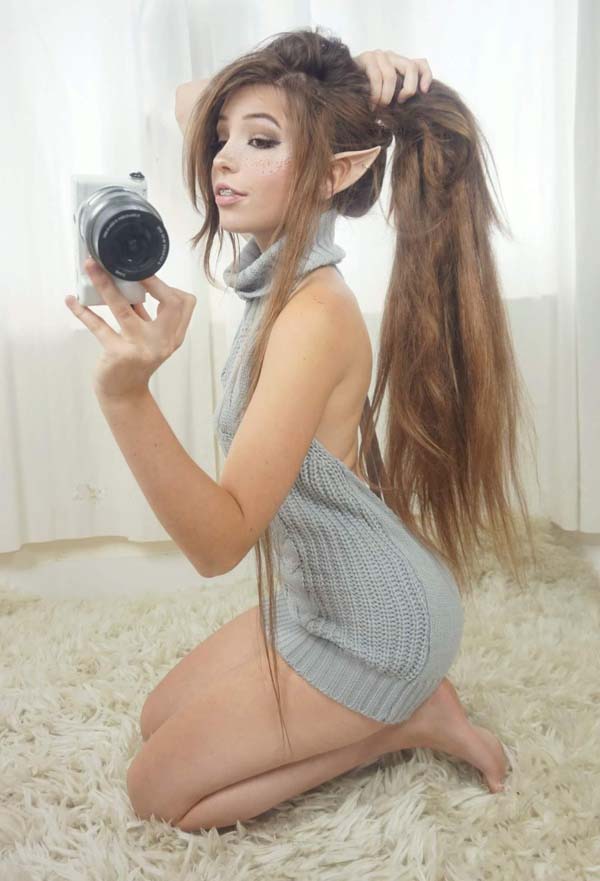 Everybody was thrilled to hear this, and the “simps” flooded her post with likes, and in no time, it crossed 1.8 million in a matter of hours.

With the deceiving titles and thumbnails, she successfully trolled millions of people. She got a lot of media coverage via this stunt. Her video titled “PEWDIEPIE goes all the way INSIDE Belle Delphine,” in which she ate a picture of PewDiePie and winked simultaneously, was featured in PewDiePie’s channel. A lot of YouTubers covered her, and she garnered massive attention worldwide.

The Genius of Belle Delphine: Selling The GamerGirl Bath Water, Capitalizing On Her Fame

Belle Delphine is many things for many people, but everyone can agree on the fact that Belle Delphine is an entrepreneurial genius. No “e-girl” has been able to capitalize on their fame as much as Belle has. She single-handedly paved the path for the new wave “e-girls” to go on and earn money from being “e-thots” online. Belle Delphine walked so they could run.

Belle is a genius at marketing herself online. She is full of ideas, and her marketing strategies are out of this world, and her product choices are bizarre and yet somehow make her money and sell out. She knows her audience and the meme culture very well.

Her geniuses allowed her to get away with selling her bathwater for US$30. On July 1, 2019, she uploaded the “Gamer girl Bath Water” on her online storefront. The product was her bathwater that she smothered in and handpicked herself.

She was inspired to sell her bathwater after fans commented that they would drink her bathwater if they could. The “Gamer girl Bath Water” was a massive success, and they sold out in three days.

This stunt was a breakthrough in her career. She got media coverage like never before. The internet welcomed this with memes and parody products. There was a knock-off site that sold “GamerGirl Pee” US$10,000. Major news sites and YouTubers covered her bathwater stunt. Some went as far as drinking it. Some went even further and used it for activities like cooking and vaping.

She even shipped a container with her spit to the Youtuber Ethan Klein.

A hoax was claiming that the bathwater caused a herpes outbreak was spread on the internet. This was later debunked.

In an interview, Belle stated that she keeps a diary full of ideas by her bed, and she is excited about things that will follow. 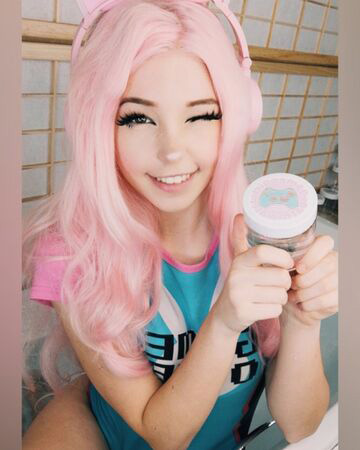 Unfortunately, Belle Delphine got banned from Instagram on the date of July 19 in 2019. It was reported that her account was terminated after a mass report movement against her. Later, it was stated that she lost her account because she violated the community guidelines on Instagram. At the time of her ban, she had 4.5 million followers.

For a brief time after the ban, she communicated with her fans via Twitter and Patreon.

She disappeared from social media platforms after a tweet on August 21, 2019. The people who were subscribed to her Patreon were thoroughly disappointed as she had promised unique content. Some speculated that she got into legal trouble because of the bathwater situation and some thoughts she was retiring.

Time passed, and there was no update from her side. However, on October 7 of 2019, Belle tweeted a picture of her mugshot and claimed she was arrested. People again speculated that she was arrested for selling bathwater. But Belle revealed that it wasn’t the case, and she was arrested for vandalizing the car of the person who stole her pet hamster. Belle went on a hiatus after uploading a video on her YouTube channel on November 4, 2019.

Rising From The Ashes: Music Videos And OnlyFans

Belle Delphine surprised everybody when she uploaded the music video “I’m BACK – belle delphine” on her YouTube channel on June 27, 2020. The video was a parody of the song “Gooba” and featured her rapping about her career as she emulated the original video for “Gooba.” As of September 11, 2020, the video has 32 million views. The video functioned as promotional material for her new OnlyFans and Tiktok accounts.

Her latest music video was released on September 2, 2020, and was titled “PLUSHIE GUN – Belle Delphine.” The video contains some graphic content related to suicide and can be offensive to many. At the end of the video, a female body dressed up like Belle Delphine could be seen hanging from the ceiling while holding a bible. This video featured her new product, “Signed Holy Bible,” which is currently on sale for US$50 on her website. 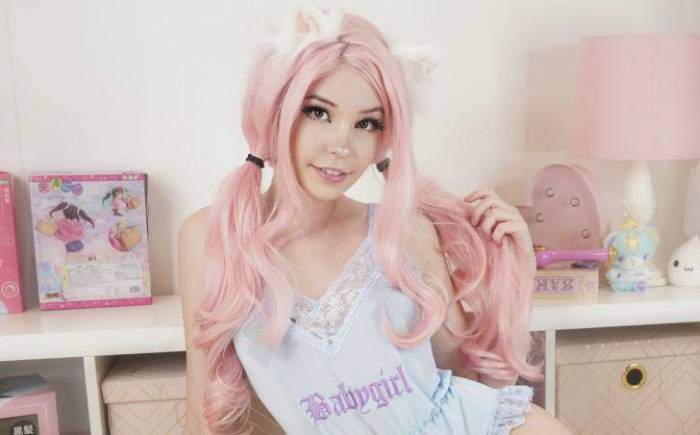 Belle is banned from several social media. Her YouTube account has 1.6 million subscribers as of September 2020. She was forbidden twice on Instagram, and her performance was prohibited on TikTok too.

Belle Delphine has been active since 2015 and has amassed an estimated net worth of US$1 million as of September 2020.