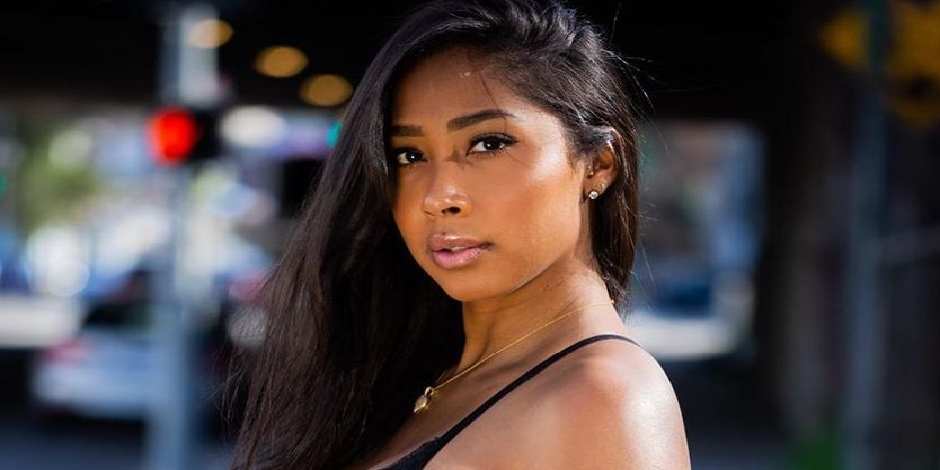 April Jones better spelled as Apryl Jones who came to fame after appearing in the VH1 reality television series “Love and Hip-hop: Hollywood is an American television personality. She established herself in the entertainment industry through her presence in the show “American Idol” and ‘making the band”.

We can also see her in a guest appearance in the show “good morning Lala land”. She has been in the gossip after being in a relationship with rapper Omarion.

Where is Apryl born and raised?

This bold and strong lady was born in Chicago, Illinois on 15th December 1986. Apryl Jones belonged to a very progressive family having an average income. However, detailed information about her family has not been disclosed yet.

Where did Jones go to school?

It’s very interesting to know that Apryl Jones was a student of science and even has a bachelor’s degree in Radiation Science. She even worked at Northwestern Memorial Hospital which is located in Chicago.

Apryl Jones’s height is 5 ft 9 inches and her weight is 64 kgs. Her body measurement is 38-27-40 inches and has attractive brown eyes and extremely silky black hair and has a black complexion. Apryl is interested in dating and developing romantic relationships with males.

What is the relationship status of Apryl?

This 36 years old American singer and TV personality have faced quite complications in her love life. Apryl Jones is unmarried but is in a relationship with Lil Fizz. Before, dating Lil Fizz she was in a long-term relationship with a best friend turned boyfriend rapper and Hip-Hop artist Omari Ishmael Grandberry who is popularly known as Omarion.

The couple broke up after doing a reality show on VH1 named “Love and Hip-Hop: Hollywood”. This show turned out to be both good and bad decisions good because she got the recognition and bad because Omarion and Apryl got separated after appearing together in the show.

They still have maintained their friendship and hasn’t affected their bond. After breaking up with Omarion, she dated rapper Game, but things didn’t eventually work, and the couple separated in 2016.

Jones is a proud mother of 3 children. She is an inspiration to all women who think that giving birth will create an obstacle in the future career. This strong lady has maintained a perfect balance between her motherhood and her career.

She has two kids with her long-term boyfriend Omarion with whom she separated in 2016 and recently welcomed her third child with Lil Fizz who is a former B2K member. In the current scenario, the couple is very happy and there is no rumor about separation.

This strong and courageous lady has become a cult figure of social media. Apryl Jones is very active in social media and keeps updating her fans and audiences about her life and her further plans through social media. Her Instagram account is @aprylsjones and has 2.9 million followers and her Twitter account is @APRYLSJONES and has 210.8k followers. Through her social media, she shares pictures of herself, her clothes, shoes, bags, family, and her beautiful life.

How Jones started her career?

Although Apryl Jones had a great future in medical science, she felt like something is holding her back and decided to go after what she actually wants. Apryl Jones decided to give up her medical career and get involved in the entertainment field so, she moved to Los Angeles to pursue her dream.

Her very first way to start a career was to participate in a singing reality show because it was visible that after coming into a reality show you can get immediate fame and popularity. Also, she wanted the world to recognize her talent. She appeared in the super hit reality show “American Idol” alongside Nikki Reed and Lucy Hale, “making the band” and “search for the next doll” alongside Clancy Brown and Paul Sparks but she couldn’t get the fame she expected she would.

After, struggling to establish herself in the entertainment industry, she finally landed to become a backup singer for the famous Hip Hop artist and rapper Omarion. Thanks to her personal trainer who introduced them. After being with Omarion, they both felt a good vibe and they decided to star on the VH1 reality series “Love and Hip-Hop: Hollywood”. Thanks to this series Apryl got recognition and admiration for her talents and skills.

Not only this show gave her popularity, but this show also gave her the opportunity to star in other projects. We can say that this show opened the door for her future projects. She made a guest appearance in the show “good morning Lala land”, “black card revoked” and has also appeared in the 2018 movie “Angel” alongside Lexi Jayde.

What is the Current Net Worth of Apryl?

Apryl Jones who has faced many rejections and has struggled a lot has worked very hard to be in the position where she is right now. All her hard works have paid off and she has a net worth of $8 million and earns around $1.6 million annually which is commendable. Her source of income is the Entertainment industry and social media.