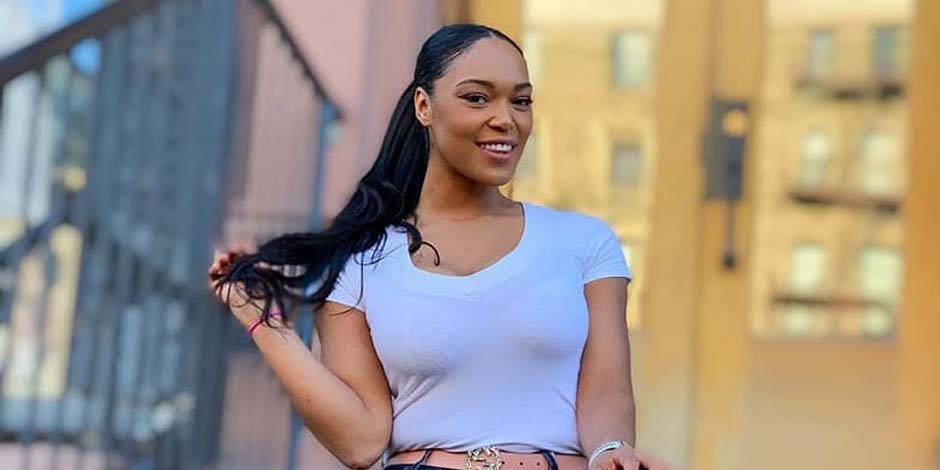 Montana Fishburne is well-known as an American model and social media sensation. She has worked for several reputed magazines brands such as Playboy and Black Men Magazine. Montana’s Instagram account is packed with her hot, curvy, and sizzling images.

Montana Fishburne has gathered such a million followers on her Instagram account. She is also known as the daughter of Laurence Fishburne, who is a Hollywood superstar.

Montana Fishburne was born in 1991, on September 7. She was born in New York, the United States of America. Presently, she is 30 years old as of 2022. Montana is the daughter of Laurence Fishburne (Father) and Hajna O. Moses (Mother). Her father is a well-known Hollywood Superstar, and her mother is a former actress and fitness trainer.

Montana Fishburne has grown up with his older brother Langston Fishburne and younger sister Delilah. Delilah is the daughter of the second wife of Laurence Fishburne. Talking about his educational background, she has not mentioned it till now in the media.

Montana Fishburne used to work as an actress in the adult entertainment industry before Montana was reportedly quit the occupation in 2014. After her tape was published in 2010, she swore that she would go back to school to get an education.

Montana reportedly tried to start a career as a dancer. Fishburne was caught on camera working as a dancer in a bar for adults in Houston. She also appeared on many racy magazine covers.

Her current occupation is unknown. However, Montana launched a body workout app called Move Your Body by Leslie and Montana in 2017.

You might also want to know about Jazmin Bean.

Montana Fishburne was in controversies while she was working as an adult entertainer. Her first adult video came out when she just turned 18 years old. Montana has also spoken to inquisitor.com about how much adult film has negatively affected her life. Fishburne has also advised young women to stay away from the industry.

Montana Fishburne’s mother supported her decision, but her renowned father was infuriated by the presence and never accepted her decision. As a result, Montana was no longer welcomed into the family. After her tape was leaked, she hoped that appearing in adult content would result in fame and fortune, such as Kim Kardashian‘s. Unfortunately, Montana has learned the hard way that there is no one size fits all method to gaining fame and fortune.

Montana Fishburne was arrested for beating up her boyfriend’s ex in 2010. She allegedly broke into the house and beat her victim up. She was also charged included assault with a deadly weapon and trespassing. Fishburne initially pleaded not guilty to all those charges but ended with no contest.

You might also want to know about Adelfa Marr.

Montana Fishburne was sentenced to 180 days in rehab after her assault arrest, which was lighter than the prosecutor wanted for Montana, jail time. She was arrested for DUI after rear-ending a Range Rover in Fort Lauderdale, Florida, I-95. According to a Daily Mail article, Montana thought the highway patrol was too busy to look; she squatted and urinated on the highway shoulder.

Montana Fishburne was reportedly checked into rehab in Huntington Beach. Her treatment cost $30000 for the duration of her stay, which is believed that going into rehab helped her as she has not had any trouble with the law, and she has not made headlines for the wrong reasons since then.

Montana Fishburne is currently single. Previously, she has dated Brian Pumper. The duo started dating in 2010. Besides this, there are no further details regarding her relationship status.

Montana Fishburne is well-known as an American model and social media sensation. She has started her modeling career at a very young age. Montana has amassed such a good amount of money through her career and lavish lifestyle. Fishburne estimated net worth is around $1.7 million.