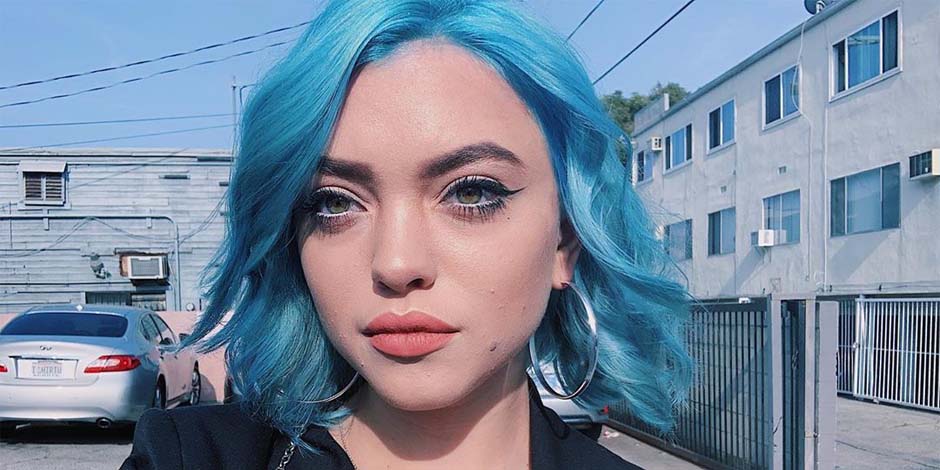 Rena Lovelis is a famous American singer who attracted the limelight for being the lead singer in the American pop-rock band  Hey Violet.

Rena lovelis was born on April 6, 1998, in pearl river, new york, but she was raised in Orangetown. She was born as a younger daughter to her father, Stacy, and Ana Lovelis. She holds the nationality of America. As of now, the young and talented vocalist has reached the age of 23 years old, but she still looks like she is in her teenage. She also has an elder sister named Nia Lovelis.

Both of them are quite similar in nature and enjoy performing arts from a very young age. Her zodiac sign is Aries which can be reflected in her personality as she is such a determined and hardworking person., She is also known as Pyrena Lucrezia Morze Enea.

Rena lovelis belongs to an average height of 5 feet 4 inches which is 163 cm. She has beautiful hazel eyes and a fair skin tone. She loves coloring her hair; though the original color of her hair is Black, she colored it to pink, which looks amazing on her.

She weighs 55 kg. Her other body measurement, such as waist, chest, dress, and shoe sizes, aren’t mentioned in any reliable sources.

How did Rena lovelis start her career?

Rena Lovelis was interested in arts and music from a young age. She was highly influenced by her parents, who were musicians. So she was in middle school when Juia pierce brought her for bass and backup vocals, her sister Nia for drum, percussion, backup vocals, and Miranda Miller for keyboards, backup vocals, and  Rhythm guitar to form the hard rock group Cherri Bomb.

The unique name of their band came from a self-help book by American music and entertainment journalist and author Carrie Borzillo titled “The Ultimate Guide to Becoming a Better Flirt, a Tougher Chick and a Hotter Girlfriend and to Living Life Like a Rock star.”

After that, they signed the contract with Hollywood Records signed on June 14, 2011, and released their debut extended play titled Stark on 18 October 2011.

They got an opportunity to be featured at several European music festivals, including Sonisphere, Reading and Leeds Festivals, and T in the Park in Scotland. They were the youngest group to make an appearance at the Oxygen festival in Ireland.

The group pit out their first studio album, This is The End of Control, on May 15, 2012, which reached #24 on Billboard’s Top Hard Rock Albums Chart and #11 on the Top Heatseekers chart. They were lauded for revitalizing hard rock by some critics.

In 2013 their frontwoman, Julie pierce, left the band, rebranding themselves as Hey Violet. They Appointed Rena as their frontwoman, and their music began to change. The group released their new studio album in 2017, which was titled From the Outside. However, Pierce said in an interview that she didn’t leave the group willingly.

Rena Lovelis hasn’t won any awards by herself, but her group Hey violet won Teen Choice Awards in 2016 in choice music: next big thing. The group was also nominated for the best underground alternative band in the iHeart Radio Music awards in 2017.

Rena lovelis is very secretive who doesn’t like to reveal her love life to the media. Therefore, it is tough to find information about her partner so, she might be currently single or is in a relationship. As of Controversy, she is not involved in any scandals or rumors to date.

What is Rena lovelis’s Net worth?

Rena is a hardworking person who has earned name and fame through her hard work and consistency.  She is earning enough income to enjoy a luxurious life. Her net worth is estimated to ab around $4 million. Her major source of income is her career as a singer.

Rena Lovelis actively shows her presence on social media. Her Instagram id has  256k followers, and her username is @renalovelis. She also uses Twitter and Facebook.