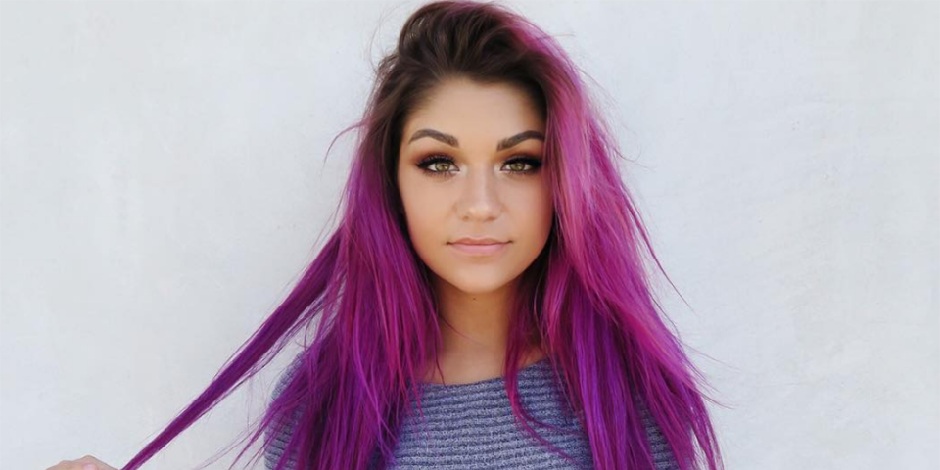 Andrea Russett is an American actress and social media sensation. She is also known as a YouTuber and later become a host on the weekly talk series “Apologies in Advance” with Andrew Russett.

You might also want to know about Halia Beamer

Andrea Russett was come into the world in 1995, on June 27. Russett was a native in Fort Wayne, Indiana, United States of America. She is presently 26 years old. She was born with the birth name Andrea Rose Russett.

Russett is the daughter of Mark William Russett (father) and Jacqui Russett (mother). Her father and mother both worked as graphic designers. She was grown up with Sister Anna Russett and Brother Anthony Russett.

Andrea has gone to a private Catholic high school for her junior education level. Later on, she went to Los Angeles, California, to pursue her dream in the entertainment industry. Andrew has also attended an online class. Later on, she left during her final year and stated, “Everybody learns differently, and I don’t learn by reading and writing a report. I need to be doing something to learn.”

How did Andrea start her Career?

Andrea Russett is a well-known American YouTuber and actress. Andrea is a YouTuber who later become a host of the weekly talk series “Apologies In Advance” with Andrew Russett. She came into fame after she started posted music videos and discussions on her GETTOxFABxFOREVER channel.

Andrea joined the YouTube channel in 2009. She had gained massive fan followings when she was 14 years old. The audience noticed Russett’s from the stop motion video named “Justin Bieber one time Music Video” which went viral within a few days. By gaining lots of views on her video, she could not meet Justin Bieber but became an internet sensation.

You might also want to know about Marijana Veljovic

Andrea’s most viewed video is “Cuddling with my ex-boyfriend| Andrea Russett,” which crossed 9 million views. Some other videos are “Never Have I Ever with Jc Caylen,” “Cooking with Andrea,” “Girls calls Boyfriend out on Cheating,” “Getting 6 Tattoos in 1 Day,” and many more.

In addition, she has already gathered massive subscribers in her YouTube channel, around 3.01 million with more than 260 million views. She started her career as a nighttime radio DJ in Fort Wayne, Indiana, in 2012. As a result, she was able to become the youngest nationally syndicated radio host in the country.

Russett also signed an agreement with “Fullscreen, Inc,” a global network of content creators and brands on YouTube channels. In 2013, she also launched her clothing brand called FLAWED. But now, her clothing account is no longer active since 2015.

She has appeared in different movies like Expelled (2014) and Lovesick (2016). In 2016, she had cast in “Sick House.” It is a thriller movie released in short increments via her Snapchat account. The film gets lots of love from her fan following because of its unique storytelling method.

Later on, Andrew Russett was cast in the short film “A Peculiar Tale” in 2016 and done the cameo in “Mike and Dave Need Wedding Dates.” Andrew has also featured on the reality television series “Catfish: The TV Show” published by MTV. After that, she became an anchor of the weekly talk series “Apologies in Advance.” This show is still running in 2021.

Russett has three tattoos with different meanings. She has a tattoo of letters MJAA on the four fingers of the left hand. Her MJAA tattoos indicate her family members name; M for her father Mark, J stand for her mother Jacqui, A for her sister Anna and Lastly A stand for her brother Anthony. She has inked this tattoo from tattoo artist Chase Fielder.

In addition, she has a numeral tattoo on her right forearm 55613 in red ink. This tattoo is connected with her close friend Sandra Peonar. Both of them, inked from Chase Fielder.

Furthermore, Andrew Russett has inked beautiful flowers with leaves in blue-black on her sternum.

Earlier, Russett was in a romantic relationship with YouTube stars Zane Hijazi and Kian Lawley. But their relationship did not last long. Later on, it’s come to know that Andrea is dating the singer, Kenny Holland.

Andrea Russett is a well-known YouTuber, actress and later become a host of the talk show “Apology in Advance.”  Her approximate net worth is around $2 million. However, Andrew’s primary source of income is her profession as an internet sensation.

Check out some interesting facts about Celebrity’s Career, Relationship, Latest Net Worth, Lifestyles, and many more on Global Stardom.